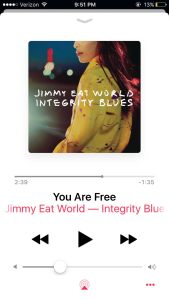 Integrity Blues, released in 2016, received more attention than many of the band’s previous albums thanks to Taylor Swift. Early in the year, Apple created an ad featuring Swift lip syncing to “The Middle,” causing the song to rise up to No. 34 in the iTunes Top Songs Chart, while Pandora reported the amount of Jimmy Eat World radio station plays had gone up 325 percent. It was perfect timing for their album drop in the fall.

The album is a refreshing listen, from top to bottom. Not every song is good, but there is one that is superb.

“You Are Free” is a non-pushy, non-abrasive dose of motivation saying that no matter what you’re carrying, everything is going to be okay. You’ll make it through. “Honey, you are free/As much as you can stand to be/You are free/And it’s anything you think that means/You are free/To be what you want/What you need.”

The song is not enough to say, “Hey, if this would have gotten radio play, it could have brought Jimmy Eat World out of the one-hit wonder curse,” but it is enough to say, “Hey, I need a song to calm me down enough to go to bed.” After a day of rough noises and thrashing rock songs, “You Are Free” is the freedom your ears need.